A Grand Jeté is a type of of leap.

The term comes from classical ballet. However, many dance forms utilize or have adapted this movement. The grand jeté is just one of an entire family of movements in which the working leg is “thrown.”

In grand jeté the initiating leg is thrown to 90º and is immediately followed by a similar throwing of the supporting leg, creating the image of an arabesque or attitude suspended in mid-air. Many dancers strive to achieve a full split in mid-air, however, I believe this is a modification of the classical ballet movement.

The grand jeté is always preceded by a preparatory movement like glissade or couru (running) the dancer is propelled upward and typically forward, although grand jeté can also be executed backward.

But is this a Grand Jeté?

I was taught (and usually teach) that grand jeté looks like this:

A leap in which the leg unfolds in a développé (example 1), is perhaps most commonly called a saut de chat. However, there is variation in the naming of this movement. According to the Technical Manual and Dictionary of Classical Ballet, grand jeté pas de chat, is the term applied by the Russian School. 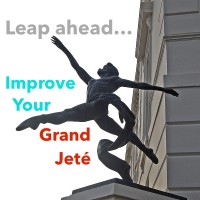 Most of the tips below work for grand jeté in either form, but the straight, brushed leap is the example on which I’ve based the advice below.

How to Improve your Grand Jeté

There are many images designed to improve the way you do a grand jeté. Different images work for different people. Here are a few of my favorites:

What are some other images which you use to enhance your grand jeté?

What other tips or reminders would you suggest?

With which aspect of a grand jeté do you struggle most?