During a Spring convention, a Dance Advantage reader and teacher observed a class in which her teenage students were dancing. During the class, the term saut de chat was used to describe a grand jeté developpé.

Though this vocabulary did not match her dictionary or training, our reader decided it was not a big deal. That is, until it started a debate that raised questions about her knowledge of terminology and remained a sticking point between she and one of her students. She asked me for clarification on the term saut de chat, as well as how to get this student to see the light. 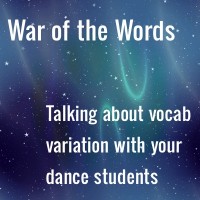 Will the real saut de chat please leap up?

My favorite ballet dictionary is by Gail Grant

. Her work is frequently regarded as a leading authority but there are other highly regarded dictionaries as well. Grant’s version does a nice job of touching on the accepted terminology across the French, Russian, and Cecchetti methods.

Saut de chat Cat’s jump. A term of the French School. This is similar to the Italien pas de chat. The working foot, instead of being raised to the side of the knee, is raised in raccourci derriere. After the jump in the air, during which both knees and feet are drawn up, the landing is made in fondu on the foot which was raised first, with the other foot in raccourci devant. The raised foot is then closed in demi-plie in the fifth position front. If the saut de chat is petit, the jump is small and the free foot is raised sur le cou-de-pied.

Saut de chat or something similar (grand saut de chat, for example) is a term that’s been used for this movement for probably decades. It’s not uncommon at all. However, according to most ballet dictionaries, this is not the “correct” term.

Why quotes around correct? Well, because ballet and dance terminology relies heavily on an oral passing-down of names for things. You’ll find multiple names for the same step in your favorite dictionary. Which of these is correct? It depends on time, place, and method of study.

I’m not necessarily saying that hundreds of people using the wrong term make it right. Just that, when terminology becomes deeply rooted, it’s not easily weeded out.

What to do with those argumentative students

1. Present several dictionaries, allow them to look up various definitions, and discover as a class how they differ.

There are many discrepancies in ballet terminology, so it may be fun to encourage them to find definitions of tour jeté for example, or a French name for the popular term “switch leap”. Make it fun – an exploration.

2. Point them to discussions online about this very thing.

Hey, this very article is a great start! Here are some forum discussions:

3. Talk to them about other cases where location in time or place can change the language we use.

For instance, in the U.S., lines could be drawn across the map showing which regions use the term Soda vs. Pop or even just “Coke”.

And, how often do people today use thee or thou?

It is a shame, but not uncommon, that students would eagerly accept a another teacher’s word as gospel, especially after being wowed or star-struck by a convention teacher.

However, if inappropriate or subversive behavior is a result, there may be underlying problems in the relationship with your students; a small part in a bigger problem that will need to be dealt with.

If possible, address terminology differences as soon as you become aware of them: soon after the observed class, or the first time you hear about the discrepancy. When you do address the issue, appeal to your students’ sense of adventure and help them make discoveries instead of lecturing. They’ll realize that there’s no ‘me and you’ or ‘us and them’.

We’re all playing the name game together, and no single source is 100% correct all the time.

What do YOU call the leap above?

Have you experienced a situation similar to our reader’s?

Tell us about it in the comments!