About OUTSIDE THE LIMELIGHT, from the author: 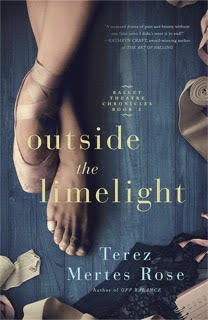 Rising ballet star Dena Lindgren’s dream career is knocked off its axis when a puzzling onstage fall results in a crushing diagnosis: a brain tumor. Looming surgery and its long recovery period prompt the company’s artistic director, Anders Gunst, to shift his attention to an overshadowed company dancer: Dena’s older sister, Rebecca, with whom Anders once shared a special relationship.

Under the heady glow of Anders’ attention, Rebecca thrives, even as her recuperating sister, hobbled and unnoticed, languishes on the sidelines of a world that demands beauty and perfection. Rebecca ultimately faces a painful choice: play by the artistic director’s rules and profit, or take shocking action to help her sister.

Exposing the glamorous onstage world of professional ballet, as well as its shadowed wings and dark underbelly, OUTSIDE THE LIMELIGHT examines loyalty, beauty, artistic passion, and asks what might be worth losing in order to help the ones you love.

Terez Mertes Rose returns to the world she created in the first novel of her Ballet Theatre Chronicles series, OFF BALANCE (Classical Girl Press, 2015). [See our review here.]

While not a strict sequel, this new story takes place in the same well-drawn setting of West Coast Ballet Theatre, the fictional ballet company in San Francisco from the first book. In that novel, we were introduced to the characters of Alice, a former ballerina who suffered a career-ending injury, and Lana, a young star of the company who is away from her home for the first time and desperately needs emotional support. In OUTSIDE THE LIMELIGHT, Alice and Lana have very minor roles while our focus turns to a pair of sisters in the company.

Rose sets up the dynamic behind the pair in prologue: younger sister Dena was singled out of the corps for promotion, leaving older sister Rebecca behind, which caused a ripple in their relationship. Complicating family matters was the divorce of their parents, each of whom aligned with one of the sisters: mother Isabella with Rebecca and father Conrad with Dena. A reader might assume this set-up would result in a tale of classic Black Swan-type sibling rivalry but Rose takes it in an unexpected direction, making the relationship between the sisters far more nuanced and complex. Each of the sisters has her own story which, while inextricably linked to the other, doesn’t necessarily involve arch-enemy theatrics.

Dena’s story begins as many dance-related tales do – with an injury that threatens her career. But recovering from surgery for a brain tumor is not the same as rehab for a broken foot or a torn ACL. Dena’s physical issues not only involve stamina, balance, and hearing but also facial paralysis. Rose reminds us just how much expression is expected from a dancer on-stage. We can’t imagine a ballerina without a smile. (We’d probably see how difficult those fouette turns really are!)

Interpersonal relationships are also a challenge for Dena. Prior to her surgery, she was often isolated from the rest of the company. She didn’t have as many friends as her sister who lived in a house with a group of other corps dancers. Instead, she roomed with one other dancer, Lana, who was frequently away with her fiance. After the surgery, when her few friends don’t know how to interact with her, Dena finds herself very lonely…

…Until Rebecca introduces her to Misha, her teacher who happens to know a great deal about the post-surgery condition she is dealing with. Convinced Misha is interested in her beautiful sister, Dena settles for building a great friendship with Misha.

Rebecca’s story involves two men – or is it three? First is her current boyfriend, Boyd, another member of the corps who has plans to take a job with a different ballet company and wants Rebecca to go with him. Then there is Anders Gunst, the company’s artistic director whom she has flirted with and loved from afar since she was an apprentice. Could there be a third? Ben is one of the ballet masters and Anders’ right hand, whom Anders uses as the middleman between himself and Rebecca, so no one suspects anything is going on between the two of them. Rebecca too has resigned herself to a life with Boyd, maybe even a move with him too, since her career with WCBT is stagnant…

…Until Dena’s absence suddenly opens up far more possibilities for, both with Anders and with the company. Maybe Boyd is not Rebecca’s future, after all, and maybe there could be more advancement with WCBT.

The love stories for Dena and Rebecca take so many twists and turns that, for much of the book, readers can’t predict the ending, who will end up with whom, or who we want each to end up with, for that matter. I, for one, appreciate that the author does not force any sort of competitive love triangle involving the two sisters, nor does she create a competitive professional triangle for them. It’s never an either/or situation, never a direct contest between Rebecca and Dena, and that allows the author to give them an honest relationship. Their friendship, with its ups and downs, feels very realistic.

Beyond the sisters, Rose populates her story with company members whose presence give further insight into the real world of ballet. Whether a reader is a balletomane, a student of dance or simply someone who enjoys a complex story, the author provides plenty of real-life politics, on-stage and off-stage dramatics, and actual choreography. In fact, one of my favorite treats of this book was Rose’s glossary of dance terms, some of which were very amusing:

Grand allegro – the big run combination across the diagonal at the end of a ballet class. Big fun. Classical Girl’s favorite part of class.

Upstage – see “downstage” for explanation; I don’t feel like writing it twice.

On a final, more serious note, in her acknowledgments, Rose describes her own sister’s brain tumor. This story is rooted in her personal experience.

Terez Mertes Rose is a writer and former ballet dancer whose work has appeared in the Crab Orchard Review, Literary Mama, Women Who Eat (Seal Press), A Woman’s Europe (Travelers’ Tales), the Philadelphia Inquirer and the San Jose Mercury News. She reviews dance performances for Bachtrack.com and blogs about ballet and classical music at The Classical Girl. OUTSIDE THE LIMELIGHT is her second novel in the Ballet Theatre Chronicles series of books. Both are available at Amazon.