When you were a young child, before you even understood the concept of reading, you probably learned the letters of the alphabet and the sounds they made. They are the Legos of Language! 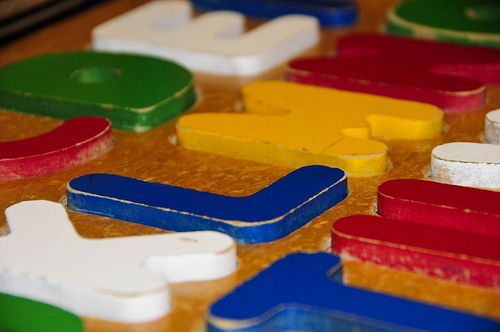 You’ll never perform a great jump, for instance, without a quality plié, or bend of the knees. A grand battement is just an ordinary kick without tendue. A time step would be nothing without shuffles and flaps.

When learning to recognize letters, it is usually just the way the shape looks that becomes familiar first. Later, we begin to understand that each letter has sounds associated with it.

We learn the rules about how a letter sounds G sounds different in certain words. We learn to guess how a letter may be used when spelling a word. Gradually, we find and understand that letters are more complex than lines on a page and learn to master these complexities.

We learn movement in a similar fashion. At first we see and copy how it looks. Only gradually, and with practice and experience, do we begin to see basic movements as having multiple components and uses in movement. The more we learn about the basics the smarter we are about dancing in general.

Letters give you a clue about the sound and pronunciation of the word. If you never learned to recognize or remember the sounds of each letter, reading or making guesses about words and sentences would be very difficult.

If you don’t know something about letters of the alphabet, you would need to learn every new word individually. Coming across a word you haven’t seen before would be like starting from scratch. If you memorized it incorrectly you might not be able to catch the mistake on your own.

Learning advanced movements before having a good understanding of the basics is just as inefficient. When you have a strong handle on the basics, you are able to guess and infer and apply your knowledge to a new step, even if you’ve never tried it before. A student attempting advanced skills before mastering the basics is practically starting from scratch each time something new is introduced and he/she is more likely to form bad habits that will take time to go back and correct.

Before we learn to write in a fluid, cursive style, we are first taught to print – separating each stroke of our pencil to create a clean and clear letter.

To build strong technique, it is helpful to break down movement in the same way. Beginners often learn to make clean and clear arm movements while standing still before they add locomotion. They practice balancing in a pose before trying to turn a pose. They learn the steps before they add the style. Gradually, a student is able to connect the dots without this process, movements are absorbed and performed as fluidly as cursive letters on a page.

When we first learn to write letters we are asked to make a Q just like all of the other students. We are also typically given extra lines on a page to help recreate letters exactly. As we gain experience, we need these extra lines less. We eventually adopt our own unique penmanship. We practiced the standard version so that our writing began as legibly and neatly as possible before we started “messing” with it.

In dance we often use the support of the barre and are asked to practice movements in a certain way so that we have a strong foundation. In this way, our technique remains clear and strong even when, eventually, we are encouraged to bend the rules and add our own unique style.

Before we ever learn to write letters, it is VERY important to spend a lot of time scribbling, not only to get used to holding a pencil but also to express oneself. No matter how much time we spend learning the technique of making letters, drawing, scribbling, and creating is typically encouraged (or should be) throughout childhood and beyond.

Creativity inspires the desire to improve technique and as technique gets better, a dancer’s body can physically do anything he/she imagines. For this reason, I try to always encourage students to “scribble” – to improvise, and create, not only as young students, but as advancing students who are in the process of learning technical skills.