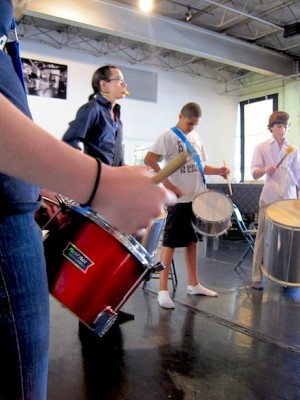 To a dance outsider this phrase might make as much sense as “tombé, pas de bourrée,” but the former is surely less likely to be heard during a dance rehearsal. Yet nomenclature isn’t the only thing that is unconventional about Kids Play, an arts program for at-risk youth founded by former Doug Elkins dancer and Hope Stone Dance company director, Jane Weiner.

Since 2001, Kids Play has served a medley of arts experiences to Houston youth aged 6-18.  For nine-month sessions (the length of the school calendar) the ensemble of children and teens meets twice a week to learn dance, theater, music, yoga and photography at Hope Center. The primary studio space and base of operations for Kids Play also hosts adult and professional dance classes and is the stomping grounds of Hope Stone Dance. During my visit, the Kids Play Ensemble are in rehearsal mode, preparing for their culminating Spring production. The theme this year is “Skool of Rock” which is why The Who’s Teenage Wasteland builds to a clamor as Weiner’s “hippy, drippy, laser show” descriptor triggers the correct movement response in a group of 8-12 year-olds.

Kids Play is not exclusively a training ground for young artists. The students receive technical instruction but as a means to support their exploration of the form. “Mostly I teach moving and the exhilaration that comes with that,” Weiner explains as we discuss her role as dance instructor within the program. Similarly, Weiner’s faculty, Chris Howard and Jason Jackson (music), Gayla Miller, Rick Olvera and Jenni Rotter (theater), Roberta Cortes (dance), Leticia London (photography) and Lidieth Valesco (yoga), are artists guiding youth through investigative encounters and, in keeping with Weiner’s mission, encourage this community of 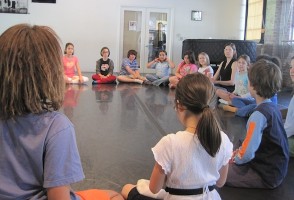 kids toward personal ownership of and expression through art. “We know that the kids are in many ways their own teachers, and to over-teach, take the fun out of it, create the neurosis of “wrong” is not what we are after,” Weiner expounds.

This approach most certainly stems from Weiner’s experiences as a “late-starter” in dance. Like many women, she dabbled in dance as a young child and was influenced by a full year of ballet under Sally Stephenson, a teacher “more concerned about teaching than recitals.” However, Weiner focused on track and gymnastics before returning to dance at Bowling Green University in Ohio at age 19. “I so often heard I started too late, or I had no technique,” she recalls. Though it was painful to hear, Weiner says she was, in most cases, deaf to the assertions. Perhaps she was too determined or too hopelessly addicted to movement to imbibe such negativity but, upon reflection she adds, “I wonder how any teacher can honestly look in a crystal ball and decide who is gonna make it and who is not going to be a dancer? A terrible use of power.” 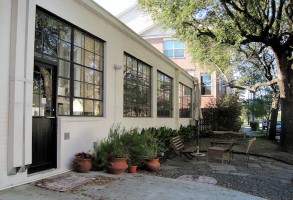 Nearly all of the Kids Play kids, over 75 of them, are recipients of $90,000 worth of scholarship for the program. Easy access to drugs, internet, lack of phone and computer regulation and other challenges facing children and the teachers and parents entrusted with their care make all youth “at-risk” in Weiner’s eyes. And so, her programs at Hope Center are open to any child on a first come, first served basis. Many Kids Play participants are recruited, however, from local organizations such as Archway Academy and Chinquapin (schools for troubled and disadvantaged youth), Baylor Pediatric AIDS Initiative, Baylor International Adoption Center, and group homes like Casa de Esperanza. “We love the mix of cultures and socio-economic levels,” Weiner says, but she prefers to keep the groups small so that her faculty can get to know the kids and families involved. As a result, some of the kids have returned to the program for three or four years which Weiner finds amazing. “The level of talent and commitment is strong,” she declares. 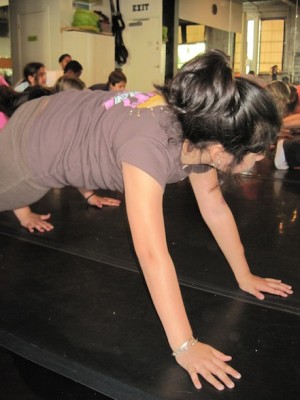 Nearing its tenth year in operation, Kids Play is an established after-school program. Weiner’s experience in bringing arts programming to youth goes back even further, still. Sixteen years ago, Weiner was a performer at the Bates Dance Festival when she began to hold afternoon classes for teens from neighboring Maine communities. She is the founder and spent ten years teaching in the Youth Arts Program which now offers music, dance, visual arts, and creative writing to children and teens for three weeks every summer.

Of these two initiatives, Weiner notes that there are similarities and differences. Both programs recognize that all children are artists and rely on adult artists to advance and affirm this principle. However, Weiner felt limited by the three-week summer program. She wanted to take Kids Play to the next level. “I wanted a place that kids grew hope, because they could return each year. The school-year’s worth of time allows a depth in the understanding these young artists begin to experience, as well as a sense of community within the class. The students come from many different schools and after school programs, so it is wonderful to watch them grow to form a strong group through the year.” 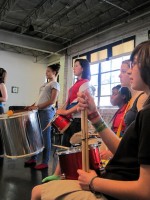 With the proven success of Kids Play, Weiner is now expanding her mission and influence to new locations. First up is New Orleans with Kids Play NOLA premiering its program this summer in 2010. When asked if she felt the Kids Play model could work in any environment, Weiner maintains ,”The key is the right person to guide and lead it. Dana Reed, who is heading up the NOLA project is fierce. Organized. Passionate. This has to be in place because it is such a full, full, full-time job. I wish it ended at 5 p.m. but it doesn’t, and the person in charge has to accept this.” She also admits that it is a challenge sometimes to not get over-involved. “I saw beautiful children that are wards of the state. Broken children. Personalities snapped in two due to the abuse they have sustained at such an early age. My heart has been broken so many times when I see these children, and I hope and pray that my small class reminds them they are something; they are loved; they do matter.”

Weiner points out that the personal rewards as a facilitator are huge. “I work with art and art is magic. I get to see miracles almost every class, and laughter, and self esteem and friendships, and budding personalities as the art goes inside these kids and makes them feel good about themselves. I see leaders emerge and at the end of the class a feeling of PROUD come over the kids that you can’t qualify or quantify on paper, but is so present.” 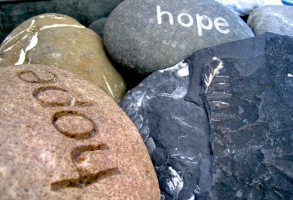 For anyone wanting to begin a non-profit arts program for kids in their own community, Weiner confirms there are some essential ingredients for success. Among these, having a model or template is a good start and energy is a must. She recommends beginning small, seeking out good advisers, great master teachers, and parents that realize that this opportunity is a gift. Weiner reminds that it also takes the proverbial village. “The community behind Hope Center is fantastic and, I know, a major reason we are a huge success.”

The young artists will also line the area around the Allen Parkway Dandelion Fountain, performing a structured improv score to honor mother earth through music and dance at 5 p.m. tomorrow on Earth Day, April 22.

Read more on Jane Weiner, her company, and her activism in this 2006 Dance Magazine article by Nancy Wozny