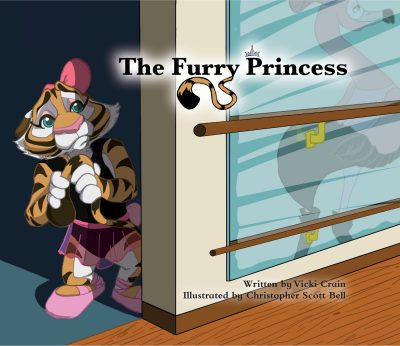 Writer Vicki Crain has created a spunky, yet clumsy, little tiger named Sasha who is a princess in her kingdom, the youngest child of the king and queen. In this colorful children’s picture book, illustrated by Christopher Scott Bell, the kingdom where Sasha lives is populated with adorable animals who love to dance.

From the book’s website:
Princess Sasha – the youngest in a royal family of tigers – is going to be presented to the kingdom. As she prepares to publicly receive her tiara, her insecurities come out. She’s shy, awkward, and clumsy (she has really big feet!). Her best friend, Cami, convinces her to take ballet classes where she finds self-confidence, makes new friends and learns to believe in herself.

Readers of 4dancers.org might recall an interview with Vicki Crain which touches on her past experience as a dancer and the genesis of this picture book. But the other fascinating nugget of backstory is the Kickstarter project that funded The Furry Princess. By forgoing the traditional process, which can take years from submission to publication, Vicki Crain and Christopher Scott Bell were able to see their creation in their own hands in a far shorter period of time. They were also able to gauge readers’ interest by going directly to them through the Kickstarter program. It didn’t take long for them to be funded and to get their book – the first in a planned series – off the ground.

Sasha’s clumsiness stems from her big feet (think: giant kitten with floppy paws) which make her trip on her skirt. She’s terrified she will be embarrassed in front of the entire kingdom when she is given her princess tiara. Her friend Cami, a crane, suggests Sasha attend her ballet classes where she will learn to be graceful. But a princess in ballet class is too conspicuous so Sasha takes classes in secret. No one but Cami knows she’s royalty.

Without the pressure of being a princess, Sasha can mess up and fall down. She can try things without fear of being stared at or judged. Of course, it also means she can be teased and made fun of for doing those same things. In an audition for The Nutcracker at the ballet school, she trips over a group of fussy flamingos and runs out, humiliated.

Fortunately, she runs straight into the dressing room of the school’s prima ballerina, Juliette, who just happens to be a tiger too! The beautiful and talented principal ballerina confesses that she also has big feet but just look how graceful she is. She gives young Sasha a pep talk and urges her to try again.

This time Sasha soars! When she gets a solo role – and a congratulatory nod from Juliette – the other dancers are stunned. After Sasha tells her mother about her fear of being on-stage, the queen gives her the tiara to wear under her costume. She believes in herself and throws herself into her role. Everyone, including her older brothers, is impressed by her dancing and shocked when she’s revealed to be a princess.

The bright illustrations of the animals dancing are both eye-catching and accurate. This book isn’t meant to be an instructional guide so we don’t expect the dancing to be perfect but it’s nice to see pointed feet and arms in correct poses. I love that in the “learning” scenes, our characters are shown turned-in or with bent knees, in contrast to the experienced Cami who is shown with proper turnout and so on.

Aside from the theme of believing in yourself, this charming book also serves to remind us — whether we are dancers or the parents and teachers of dancers — that it’s okay to fail. Sasha is not successful at everything she does and surprisingly, the world does not end. In fact, she’s given more opportunities when she’s failed; she can try many things until she finds the one that’s right for her.

The Furry Princess can show young readers that everyone has a different definition of success. Sasha does not take ballet lessons in order to be a prima ballerina. While she sees the other tiger Juliette as a role model, her goal is to be graceful enough to not trip over her feet. That is Sasha’s vision of success. Another dancer might join classes to meet new people; yet another might enjoy learning new things. Not everyone wants to be the best. Some just want to be.

As mentioned, this is the first in a planned series. Readers will be enchanted to see their animal friends in more stories — hopefully they will involve dance too.

Vicki Crain works in the Marketing department at The Joffrey Ballet. She is a former dancer and teacher and spent many years as a Chicago-based freelance arts and culture writer focusing on dance. She holds a B.A. in English and is the author of the blog Rogue Ballerina.

Christopher Scott Bell is a freelance illustrator who received his B.A. in Illustration from the American Academy of Art, Chicago. He has been an artist his entire life, but collaborating on The Furry Princess has been the catalyst for Chris to pursue his love of illustration as a career.

Both the author and illustrator can be reached through the book’s website, The Furry Princess. The book may also be purchased at the website.