Tap dance is tied more closely to music than most of us realize.

Tap’s musical potential is so great that I would not find it odd to one day see a tap dancer as an integral part of an orchestral ensemble or having a reoccurring role in contemporary chamber music – or your next-door neighbor’s kid’s high school garage band.  It is this generation of tappers’ embrace of advanced musical concepts that has helped usher in the rise of tap dance’s status from a kitschy novelty act to that of a higher art form.

Finally, Goofy will get the respect that he deserves!

But how strong is tap dance’s relationship to music?

There is so much to explore, like intervallic relationships – the tones produced when two notes are played together.  Take for example the happy tone produced by playing the notes C and E together on a piano, or if the E is lowered one half step the melancholy tone produced from playing C and E-flat.  How does a half step make such an impact?  How do we do this in tap?  Can the complete gamut of human emotions be experienced through the distinctive sounds of metal on wood?  As tap dancers it is our responsibility to listen to the sound of dance.

For tap dance to be considered music it must adhere to the four basic properties of musical tone, which are: its intensity or loudness, its duration or length, its frequency or pitch, and its vibration form or timbre.

No, this is not an ad for a Calvin Klein fragrance.

Intensity or loudness is a no brainer when it comes to tap dance.  The more force one applies to a step the louder it will be.  Children who don a pair of tap shoes for the first time will quickly become aware of their capacity to create very intense sound before they learn a single step.

Of course, I always treasure those first tap classes.

Because you can’t HEAR sarcasm in a blog post.

Here’s the thing about the intensity of sound: there exists both high intensity and low intensity.

Dynamics in music is the varying levels of volume of sound that a musician can create, and with that comes varying levels of emotion that can be introduced into tap dance.  If loud can equal excitement and fast can mean ferocity, then quiet can equal poignancy and slow can mean thoughtfulness.

For my readers who are teachers, next time try having your students perform an exercise, combination, or whole dance as quietly as possible.

To sustain a note is to prolong its duration, and certain instruments have a greater capacity for sustain than others.

Sustain can be measured by a device called an oscilloscope, an electronic instrument used to view and evaluate waveform patterns that tell us about a sound’s frequency (pitch), intensity (loudness), and duration (sustain).

On an oscilloscope, most musical tones exhibit a characteristic shape consisting of intensity or loudness and duration that is called an envelope.  An envelope normally consists of an initial attack followed by a steady state or sustained sound, and concludes with its eventual decay or release.

For example, here is the envelope for a piano. 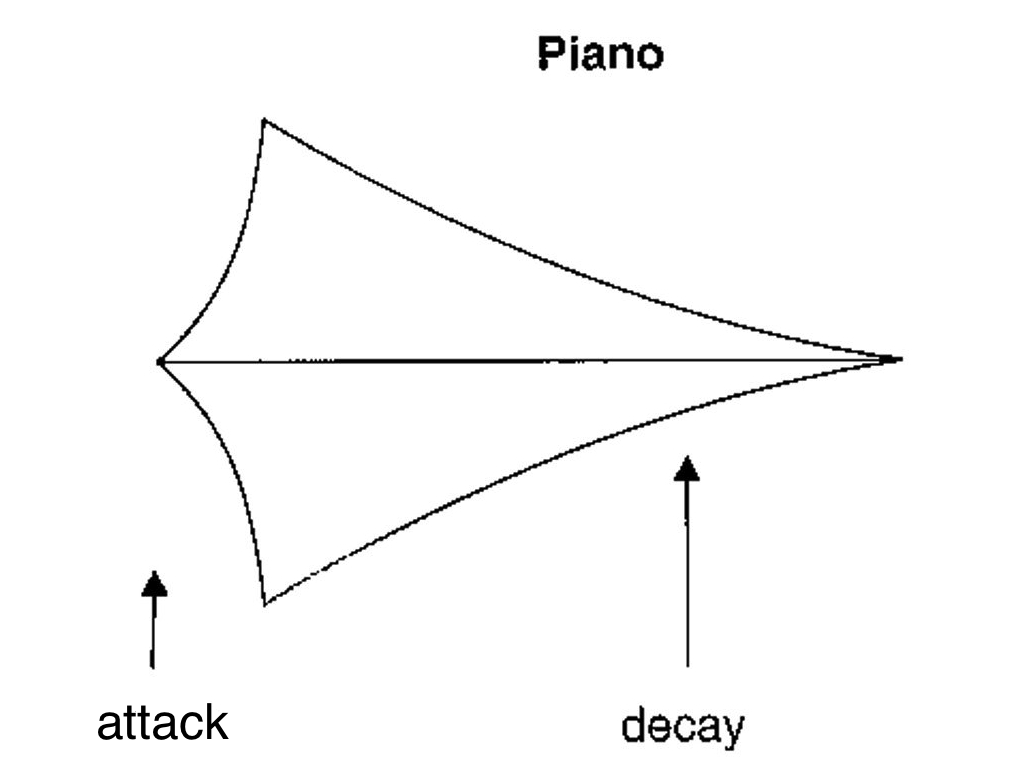 Compare that to the sustain of a clarinet: 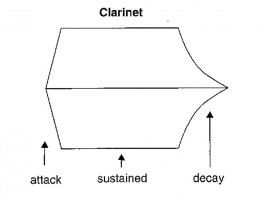 Here is where tap dancers are limited.  The “notes” that involve striking the floor in tap cannot be sustained without the aide of acoustic or electronic accoutrements.  Whereas wind and bowed string instruments can sustain any note, the only steps in tap that can be sustained are those that slide, glide, and scrape.  A sustained tap note could involve swishing your foot in a circle, turning your whole body, sliding à la Dr. Slyde, or attempting your best long jump… as long as your feet remain in contact with the floor.

This can also prove favorable for a tap dancer; it is my theory that a pair of legs can produce a more forceful amount of pressure for a longer period of time than either a pair of arms or a pair of lungs.  How long could a tap dancer sustain a particular note?  Hours?  Days?  The world record is open if anyone wants to give it a try!

Though considered a legitimate dance form by few, nobody can sustain a “limbo” like Keanu Reeves.

Stay Tuned For Part 2 of Tap Is Music (And I Can Prove It) In Two Weeks!