“I don’t think dancers are always aware that an observer, even an amateur like me, can tell the difference between someone going through the motions and someone who is passionate about their art,” says photographer Scott W. Lewis.

“The difference in the image is of someone standing in an awkward position and an image that conveys that passion. My photography evolved from capturing something in focus to capturing that “magic moment” of expression where you can truly see the dancer’s love and dedication in what they are doing.”

Scott Lewis likes to say that he fell in love with photography by accident. He bought his first camera only a couple of years ago for no other reason than capturing the drama, dance, and athletic activities of his four daughters.

“I had no intent to do anything other than collect keepsake snapshots,” he explains, adding, “I realized that I truly enjoyed it, far more than I originally thought I would.”

“At first, shooting dance was all about the technical challenge of trying to capture athletes in motion under the most horrendous lighting imaginable,” he muses.  “I got the usual polite comments about the images, and had almost given up on more than one occasion.” Yet images used on Chicago WTTW’s Fear no Art website and on the cover of Dance Studio Life gave Scott the encouragement he needed to keep moving forward.

The image above is from a dress rehearsal of Faubourg Theater’s performance of Paquita at the Prairie Arts Center in Schaumburg, IL.

“While almost all my dance photography is with Salt Creek Ballet, I didn’t want to wait until Nutcracker season started to shoot more dance, so I kind of snuck into Faubourg’s rehearsal,” says Scott.

However, this isn’t the first photo of Scott’s to appear on Dance Advantage. After his submission of the Paquita photo, Scott’s Flickr exploded with Nutcracker photos and I happened upon a beautiful capture I knew I wanted to share.

Scott allowed me to add something of my own to his image — an honor, more so because the lovely young dancer making it snow is his daughter! 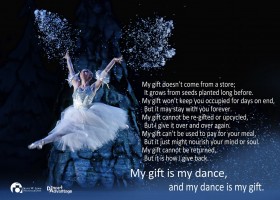 Scott W. Lewis is from Schaumburg, IL in the Northwest Suburbs of Chicago. He doesn’t shoot professionally and has no background in dance. Instead, he’s worked in IT for the last 25 years.  See more of his photography at swlphoto.com or on Flickr.