Sliding has long been a very popular move as it gives the impression that the dancer is off-balance and could fall at any minute, like a juggler trying not to drop his pins.

The ease at which this step garners “ooos” and “ahhhs” makes sliding an appealing step for tap dancers, but few tap dancers have as broad an appeal as Dr. Jimmy Slyde, whose popularity is in part due to his signature move: his slides.

While no two slides were ever exactly the same, his technique, grace, and laid back composure made his brand of sliding unmistakable. 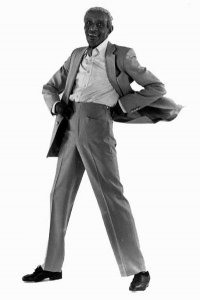 The novelty of the slide comes from the illusion that the floor has somehow slicked, replaced with an invisible, icy layer.  This is accomplished by jumping in the air and sliding one or both feet, usually flattened by pressing the heel into the floor.  The tricky part is adjusting to the disorientation of momentary weightlessness.

Especially difficult is sliding a single leg inward, towards the center of the body, or outward, to the side.  It is difficult because your center of gravity is now suspended without any support underneath, as putting down the other leg ends the slide.  The longer you can keep your other leg in abeyance (a state of suspension), the more effective the slide.

Sliding has been around for a while, and Jimmy Slyde was not the first to glide gracefully across a stage.  Over the years many tap dancers have used sliding to great effect.  Tap dancers in the first half of the 20th century would identify themselves with a specialty step, and sliding was a very popular one.  A good example is the team of Tip, Tap and Toe, whose member Raymond “Toe” Winfield performed breathtaking slides, often on small platforms, each one inches away from a bad tumble.

Jimmy Slyde developed his signature gliding style with former partner Jimmy ‘Sir Slyde’ Mitchell, who together formed the class act of the Slyde Brothers.  He went on to work with some of the biggest names of the big band era like Louis Armstrong and Duke Ellington, as well as garnering rave reviews in both film (Tap) and on Broadway (Black and Blue).

“Is that choreography or improvisation?”

That’s just it! The answer hit me when the question arose again and again while showing Jimmy Slyde footage to several tap classes of various levels. You wouldn’t know unless someone told you that he was making it up as he went along.

So clean are his transitions in and out of his slides that it is the fluency of his namesake step that puts Dr. Jimmy Slyde’s slides on my list of most famous tap steps of all time.