The “boombox,” the first of which appeared in the 1970’s, reached its peak in sales and mass appeal during the early 80’s.

But, by the latter half of that decade the boombox (or ghetto blaster) was already on its way out as consumer interest began veering more and more toward personal, handheld devices. Yes, I had a Walkman, kids!

To most in this age of MP3 players and smart phones, the idea of a boombox might seem downright antiquated…

save for one particular population: dancers!

For crews and street performers, a box that can deliver is a must.

And if you’re a traveling teacher who has ever had to make do with tiny speakers, plugged into an iPod, in a large room full of talkative teenagers, you know the value of a subwoofer!

I’ve lugged around a portable CD/cassette player with detachable speakers to all kinds of rehearsal spaces and even classes and performances in unconventional locations (with unacceptable audio systems).

Enter the Pioneer STEEZ, a line of digital-age blasters, designed specifically with dancers in mind!

The good folks at Pioneer, a company long associated with electronics and audio, allowed me to test drive the Duo, one of three models in this line.

Dance-specific features of all three include:

Now, before my contemporary teachers start to squee, let’s be clear that the true target consumers for this product are b-boys/girls and dance crews.

Still, a portable box that does all that with your digital music files (no CDs necessary), plus includes a dock for your iPod or iPhone? Pretty cool. 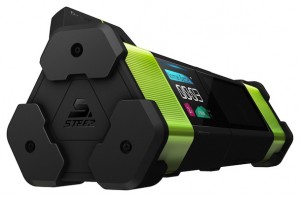 The Duo, which is the lime green model, is surprisingly lightweight and smaller than I first imagined (just over 14 inches wide, it’s about the length of my forearm from elbow to fingertips). Yet, its triangular design with protective plastic guards gives me the impression the unit could handle frequent transport.

In fact, though you might assume that the smaller Solo is the only “carry-along” model (it fits in the water bottle slot of most backpacks), the Duo could easily fit inside your duffle or dance bag. It also has a convenient handle at one end.

Under things that make me go hmm, the free software MIXTRAX, used to load songs from your computer’s iTunes library into the 4GB of memory on the device (which also sports an iPod/iPhone dock), is NOT compatible with Macintosh computers.

We are an Apple-loving household with no PC in sight. I was told that a Mac-compatible version of MIXTRAX is in the works, but for the purposes of this review I called upon relatives and borrowed a PC laptop. Even then, an upgrade to the computer’s operating system was necessary before we could use it, so DO read the system requirements available at the Pioneer website.

Even on a computer foreign to me, downloading and setting up MIXTRAX was relatively straight-forward. The interface is similar to iTunes and other music management software. You can get a video preview of how it looks and works here.

There’s not a lot of instruction for using this software in the STEEZ operating manual (more detailed instructions are at mixtraxnet.com) but in this case MIXTRAX is primarily used only for the transfer of digital music on your computer to the STEEZ unit.

This transfer can take a long time if you have a lot of music in your iTunes library. Since MIXTRAX is ideally for managing and playing back music DJ-style, I would have liked to see an option to transfer only certain playlists — or essentially, the dance tracks I wanted to access on the portable device.

Once my music was transferred, I could control all of the dance features from the panel of buttons on the Duo or from the remote.

The Tempo Control was smooth and this, along with the Dance Cue option would be really useful for any dance teacher or performer.

Pre-loaded Rhythm Sequences would be helpful when breaking down skills or even working with tap dance students. I didn’t play with this much, but it is possible to edit and upload your own rhythm sequences via MIXTRAX.

Features like the 8 beat-skip and Dance Boost are also excellent and come in handy in lots of situations.

Clearly the Auto Battle Mode, which allows the user to set up time limits and number of rounds, is geared toward an urban style of dancing. But, you know me, my mind begins to fantasize how this might be used with other improvisational dance scenarios – creative dance students, for example. It certainly has potential, though the default and alternative voice files used for calling time and the seconds remaining all have effects that might seem over-the-top in some situations.

Similarly, though the continuous-play DJ Mix and transition effects were great for all of my heart-pumping warm-up music, the transitions didn’t exactly fit more subdued music styles.

You can create playlists in MIXTRAX but it’s also interesting to note that this software is able to sort your music according to preset genres and moods like House, Techno, Chill, or Thump, and then make these available for playback or mixing on your STEEZ. My music was filed according to the best match possible which, in some cases, was not a match at all because not all of my music is DJ-worthy.

The Duo has a nifty twist-and-secure iPod/iPhone dock that supports almost all models of these popular gadgets. Neither the Solo or the Crew’s dock is designed this way, although both do feature a dock.

It’s important to note that the dance-specific controls mentioned above function only with music loaded into memory on the STEEZ device. These DO NOT function during iPod/iPhone use.

In fact, the iPod function is really only a playback option. Though I suppose it’s similar to other iPod dock and speaker systems, I was actually disappointed with the limited functionality available here. The full-color LCD display shows the title, artist, and time elapse of your tracks but there is no easy way to access your iPod’s menus or playlists. Playback is pretty much all it does.

On the upside, a really nice feature is that, when plugged in to an outlet with the adapter, the STEEZ will charge your iPod/iPhone.

I’m no audiophile but I was quite pleased with the volume and overall sound produced by the Duo. It, like the Solo, features two 40mm (full range) speakers that would be enough for smaller spaces and classes of no more than 15 people.

Though still weighing less than 17lbs, the Crew is larger in size and output, boasting two 26 mm tweeters, two 80 mm full-range speakers, and one 135 mm subwoofer. This model can also be plugged in to a larger sound system, making it ideal for bigger classes, large/outdoor spaces, and performance venues.

All units come with an AC/DC adapter for plugging into an outlet. The Duo (and the Solo) can also be powered by 6 AA batteries, while the Crew takes 10 D batteries.

What do the Pioneer STEEZ cost?

The Pioneer STEEZ portable music players are stylish and maybe even the ideal “boombox” for the 21st century dance crew.

Hip-hop/urban/street dancers, teachers, and studios, as well as dance team, cheer squad, or fitness-dance leaders are likely to love and get great use out of most or all of the dance-specific features.

I say this without having reviewed it specifically but, despite its heftier size and price tag, I think the Crew is probably the more versatile machine, providing the most bang for your buck. The Duo (which I did review) is still a worthy option for individuals or smaller groups, however. And I’ll mention that the smaller Solo has almost all the features of the Duo, with the exception that its iPod dock is open, not covered, and the Auto Battle has no “Circle” option.

Designed for a pretty small demographic of consumers, these portables seem a bit pricey. However, the quality is top-notch compared to the majority of boomboxes left on the market.

With its STEEZ audio system, Pioneer is revitalizing a breed of music player that seems nearly extinct, yet still has use and meaning in the dance community.

Before you go, I just thought I’d share a video produced by NPR Music on the History of the Boombox:

The History of the Boombox, NPR Music
Watch this video on YouTube.

And check out the online Vintage Boombox and Ghetto Blaster Museum for some truly unique artifacts, particularly from the “Golden Age” of Boomboxes.

Do you use a portable audio system, anymore?

If so, what kinds of features are or would be most useful to you?