Guest contributor, Katie Harrison is known as the Girl with the Tree Tattoo because of the tree of life tattoo that covers her entire back. She has been taking ballroom dancing lessons since December 2012 and competing in pro-am ballroom competitions since April 2014. Here she talks about the elements of dance, which may already be familiar to you, as they relate to ballroom dance. I found it interesting to consider how these dynamics apply in partner dance and I hope you will too!

The “Girl with the Tree Tattoo” Takes Her Dancing “W.E.S.T.” 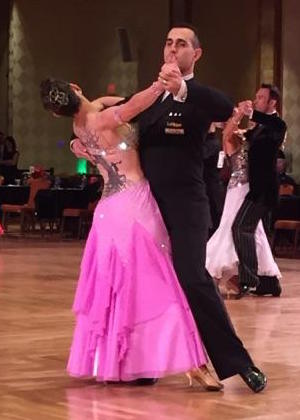 In March (2015), I had the opportunity to take a ballroom workshop with Jonathan Roberts, Toni Redpath and Michael Mead. They were promoting their new ballroom competition, the Ballroom Beach Bash, and traveling to different studios in my area to give these free workshops. So when I found out they were coming to my studio, I jumped at the chance to learn something from these professional ballroom coaches/judges.

The topic of the workshop was the dynamics of dance and how you can play with them to drastically alter the character or feel of your steps. Four areas were discussed: Weight, Energy, Space, and Time (or “WEST” if you like easy-to-remember acronyms).

Each dynamic exists on a spectrum and how you utilize that spectrum affects how the emotion of your dance performance appears to your audience.

For me, tools like these are a godsend. Expressing the emotion of a dance is very hard for me because it makes me feel vulnerable and I’m afraid of making a fool of myself. To have a technique that I can apply to create the emotion of the dance rather than depending on my facial expression or improvisation from “feeling” the music allows me to explore this aspect of dance that I find most challenging without having to throw myself into the so-called deep end.

Here is what I have learned about the four dynamics of dance: 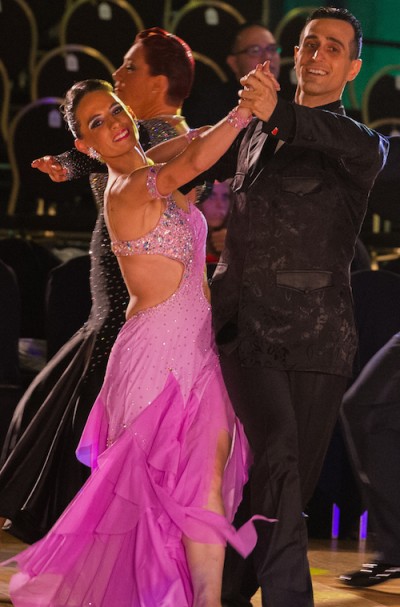 The weight dynamic exists on a spectrum that goes from heavy to light.

An easy way to play with this dynamic is to just stand in front of a mirror and raise your arms. Just raise them, don’t think about it. The way you raised them would probably be considered neutral on the weight spectrum.

Now raise your arms again but imagine you have 20 pound weights strapped to them. You probably raised them slower and engaged your muscles more. That’s the heavy end of the spectrum.

Now raise your arms one more time, imagining you have helium balloons underneath them. They can just float up with hardly any effort. That is the light end of the spectrum.

You can play with changing the weight as you move as well. Start crouched on the floor and imagine you are a seedling just starting to sprout. As you rise up, at first you will be on the heavy end of the spectrum because you are still buried beneath the soil. But as you break through the soil’s surface, the movement should become lighter as you stretch up toward the sun.

In ballroom dance, this dynamic is reflected in the general character of different dances. Waltz is generally on the lighter side, whereas paso doble is very heavy.

The energy dynamic moves between positive and negative. I have also heard this dynamic described as flow that goes between free and bound.

In ballroom, applying positive energy to a move usually means moving in an upward or forward direction, while negative energy brings the movement down or backward.

For example, if you want to exhibit a positive energy in your arm styling, you keep the arm movement at shoulder height or above. You can also play with how you release the energy, whether it be in a smooth, steady stream or in bursts.

Apply that to ballroom dancing and you will find that the energy in cha cha is kept much more bound than in bolero. Shorter movements require a different energy than larger movements. 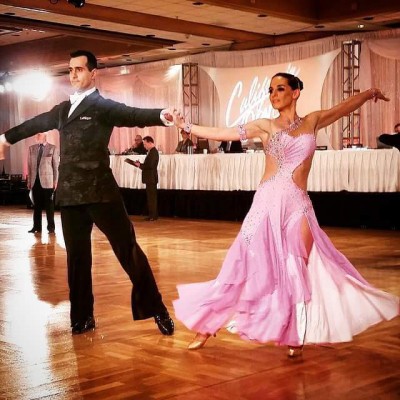 Space can refer to the space between you and your partner or the space you yourself take up. Making this space larger or smaller changes the relationship between the dancer(s) and the surroundings.

If you want your dance character to exude excitement or openness, you might, for example, take up a larger space by holding your arms wide open instead of wrapping your arms close around you.

Partners dancing very close to each other could create feelings of passion or even conflict, versus dancing farther away from each other.

The time dynamic ranges from fast to slow. This one is pretty self-explanatory. If you run toward something versus walking, you can create a feeling of intensity or aggression instead of calm or passivity.

In the ballroom world, a dance like tango plays a great deal with the time dynamic using a combination of slow and sudden steps to create a dramatic performance.

To practice these dynamics in the workshop, we started with a body part and an action, such as stretching a hand. Then we played around with the dynamics of that action. Stretching the hand slowly up and away from you creates a completely different feel than stretching quickly out from your center or starting with the hand outstretched and pulling it lightly back toward you and letting it float alongside your face.

Even though I would normally be very anxious about practicing expression in a group setting, it ended up being a lot of fun! And something important to note for anyone who shares my fears of performance: you have to play around and find out what feels wrong as well as what feels right. It’s kind of a process of elimination, so don’t be like me and criticize yourself for trying and not getting it right the first time. Explore, play, have fun, and, most importantly, dance! 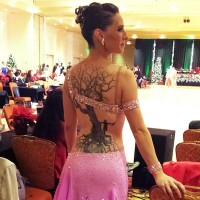 It was through ballroom dance that Katie Harrison started to discover who she really was and what she was capable of, despite the demons of fear, self-doubt, and anxiety that live in her head. Katie started her blog, the Girl with the Tree Tattoo, as a way to share her experiences as an amateur ballroom dancer and connect with other dancers and people in general who are pursuing a passion.

Many thanks to photographers, Kelly Paige, Briana Haft, Meredith Jones, and Gary Flashner.