Could a young man of 16 who does not speak any English, who has never seen western ballet let alone trained in it, be ready to study at the School of American Ballet with only a few months of preparation? Could he be ready to perform with one of America’s top ballet companies only six years after his introduction to the ballet barre? 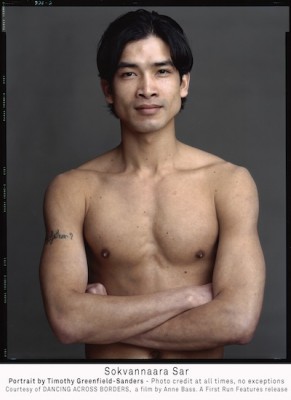 Ready or not, this is exactly what Sokvannara Sar accomplished, with more than a little help from a few tireless supporters. The wholly unique circumstances of his still-unfolding life illustrates the universal hope, struggle, and sacrifice of all dancers.

Singled out in Cambodia, where he was a poor boy with a hunger for his homeland’s traditional Khmer dance, Sar’s strenuous metamorphosis as he is whisked into American culture and the world of ballet is documented in the new film Dancing Across Borders. Known as Sy (pronounced like ‘see’), the documentary’s subject overcomes nearly impossible odds. Yet, unlike many dance stories, Sy himself is not the dreamer. He did not choose ballet. In a way it chose him via longtime ballet devotee and philanthropist, Anne Bass.

Bass is in fact the director of this film, though like Sy this is a role she never really intended to play. Her entwinement in Sy’s development is so great, however, that it is perhaps only fitting that she be the one to tell his story. While visiting Cambodia with the World Movements Fund in 2000, Bass discovered Sy at a dance recital at Preah Khan temple. Enthralled with Sy’s presence and raw talent for performance, Bass made a naively bold move and invited Sy to come to America, where she would be the benefactor for his study in ballet at the prestigious SAB school. Not bargained for was the uphill battle of this endeavor. That classical Cambodian dance bears little technical resemblance to classical ballet, that Sy would require intense and grueling coaching by an unshakable and steadfast believer in his abilities (found in Olga Kostritzky) before SAB would accept him as teachable, that isolated by barriers of language and culture Sy’s exuberant personality would wane for a while, and that he would remain uncertain of his future in ballet even beyond the film’s frame, were unexpected challenges. 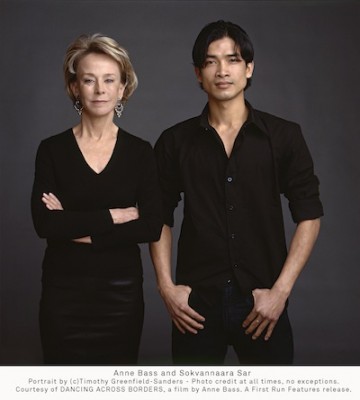 Dancing Across Borders isn’t without some clunky moments of exposition and may dwell too long on achievements that mean little to anyone unfamiliar with ballet. However, Bass earns respect as a first-time filmmaker in taking on this open-ended narrative. Able to shape the documentary herself, she might have painted a triumphal picture of the American dream personified and, I suppose, some may still interpret it this way. Amazingly, however, Bass resists a Cinderella telling and provides, with ample footage of Sy’s progress, an unflinching glance into the rigorous training and hard-won rewards of ballet. She also does not shy away from Sy’s inner conflict as a young man trying to reconcile two worlds, two cultures, and find his place within each. She underlines this at one point in the film with Joni Mitchell’s “Both Sides Now,” poignant as ever in the language of the Khmer people. Ultimately Bass’s ability to place Sy’s heroism and the strength of the Cambodian people at the heart of the story effectively conveys that hope is boundless.

Shakespeare’s line, “Be not afraid of greatness: some are born great, some achieve greatness, and some have greatness thrust upon them,” comes to mind when considering Sy. His achievements are a reflection of those who believed in him, and like a beam of light hitting this mirror, his trajectory was altered when Anne Bass recognized his inborn greatness, a combination of qualities shared by all true dancers: a buoyant spirit and irrepressible courage. That’s why Dancing Across Borders, the depiction of Sy’s journey across the frontier of ballet is a tale for and about dancers everywhere. 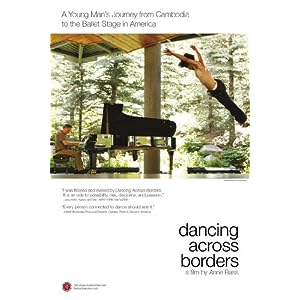 Dancing Across Borders is scheduled for release on Amazon.

This documentary provides some interesting food for conversation on ballet and culture. Teachers, dancers and parents, whether you see the film or not, here are some questions and exercises for reflection…