I wish I could tell you that I have had a lifelong love affair with history, but that is not the case.

It was not until college that I truly realized how fascinating history can be, especially when viewed through the eyes of a dance.

Hoping to whet your appetite, too, I offer these appetizers – just a little taste of the wonderful world of dance history. 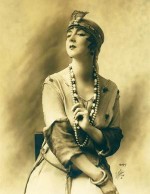 Ruth St.Denis was a zealous young dancer. She had been trained in several acceptable forms of dance for a young woman at the turn of the century, and decided she wanted to be a performer. She went to a theater to audition and began performing for the first theater employee she saw, the ticket seller. Luckily for Ruth, he was nice enough to help her set up a proper audition. Today, she is known worldwide as one of the founders of the Denishawn School of Dance. She taught many famous modern dancers including Martha Graham and Doris Humphrey.

Who decided 32 was the magic number for fouettés? Was it a choreographer who demanded that a dancer conquer the amazing feat for his latest creation? Or, was it a dancer who said: “Hey! Check this out….1, 2, 3, 4…..32!” In the late 1800’s, Pierina Lagnani mastered the completion of 32 fouettés, then Marius Petipa choreographed them into almost all of the classic ballets, which is why they are so popular, even today. Many ballerinas tried to copy her, but they could not manage it without getting dizzy or losing their balance.

What was her secret? Spotting.

In the performing arts we have a rather ill advised saying: “Safety Third.” Many of the artistic personnel in a theater will make references to aesthetics and budget taking precedence over safety. In the 19th century, stages were lit with gas lights, making fire one of the major hazards of being a stage performer. It is especially hazardous if you are dancing on stage in a fluffy Romantic tutu made of highly flammable tulle. Opera house management realized the danger for the dancers and required them to dip their tutus in a fireproofing solution. One dancer, Emma Livry, refused claiming that the solution made the tutus look dingy (“Safety third!”). She touched a gas lamp that night and died 8 months later of the severe burns she received.

Have you ever wondered why theater the seating is set on an incline from the back row all the way down to the orchestra pit? It’s arranged this way so that everyone sitting in the audience can see what is happening on stage. If the seating were level, it would be rather difficult so see over the 6’7” man sitting in front of you. Theaters were not always designed this way. There was a small period of time where theaters were constructed with “raked” stages, where the seating was level and the stage was set on an incline. Imagine trying to execute a triple pirouette on point, while on a hill. This is where the terms “upstage” and “downstage” originate.

Swan Lake is one my favorite ballets. When I was little I had a video of Evelyn Hart dancing the lead role and I watched her over and over again. However, when Swan Lake first debuted in Moscow in 1877, it was a complete flop. Perhaps the reason was that the Prima Ballerina, the one who the role had been designed for, was not allowed to perform. Why not? A Moscow official complained about her, saying he had courted her and given her jewelry and other expensive gifts and she sold them for cash and married someone else. Sounds like The Bachelorette, doesn’t it? The ballet was reworked and presented several years later to much better reviews.

If at first you don’t succeed, try, try again. 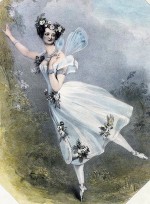 This next one is going to sound like a bad dream, but it really happened. Marie Taglioni was a wildly popular 19th Century ballerina. She was the Taylor Swift of her time. One day when Marie was on tour, her carriage was attacked by bandits. They ordered her out of the carriage and laid out rugs and ordered her to perform for them. She took a deep sigh of relief and obliged. The bandits sent her back on her way to her next scheduled stop, but they kept the rugs as souvenirs. I wonder if they were the same fans who cooked and ate her ballet slippers for dinner?

“In the 1840s, when Marie Taglioni went on pointe for a few seconds in La Sylphide, her momentary weightlessness became an icon of the transcendent power of ballet. A pair of her shoes sold for 200 rubles and was cooked and eaten by her admirers.”

Laurel Foley has been dancing for over 20 years, she earned her BA in Dance Pedagogy from Butler University. She currently teaches ballet and children’s dance at Style Dance Academy in Franklin, IN and is enrolled in the BASI Pilates teacher training program.