Last October, we were pleased to share news of The Royal Ballet Cinema Season. Your response to this monthly opportunity to see the work of London’s premiere ballet company in U.S. movie theaters has been extremely positive.

If you missed Giselle in January, fear not. You can still catch two more classics in February and March. 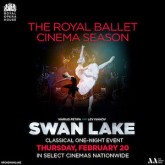 Anthony Dowell’s romantic interpretation returns the ballet to its 1895 origins by using the choreography of Lev Ivanov and Marius Petipa. Dramatic costumes emphasize the contrast between human and spirit worlds, while glowing lanterns, shimmering fabrics and designs inspired by the work of Carl Fabergé create a magical setting. The twinned role of the pure White Swan and the scheming, duplicitous Black Swan tests the full range of a ballerina’s powers, particularly in the two great pas de deux of Acts II and III. Other highlights include the charming Dance of the Little Swans performed by a moonlit lake and sweeping ballroom waltzes in the splendor of the royal palace 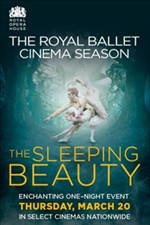 Marius Petipa’s classic 19th-century choreography is combined with newly created sections by Frederick Ashton, Anthony Dowell and Christopher Wheeldon. First staged in St. Petersburg in 1890, The Sleeping Beauty is the pinnacle of classical ballet: a perfect marriage of Petipa’s choreography and Tchaikovsky’s music and a glorious challenge for every dancer on stage. Today’s The Sleeping Beauty not only captures the mood of the original but shows that this is very much a living work for The Royal Ballet, growing and changing with the Company while celebrating its past.

These special one-night events screen at 7pm (local time) in select theaters nationwide. Follow the links above for more information or to buy tickets.

Many thanks to Fathom Events, Arts Alliance Media, Mr Wolf and the Royal Opera House for making it possible to see world-class ballet on the big screen!

Let us know what you think of the series in our comments below.